In 2017, Dr. Wright joined the Birmingham (Alabama) City School District as the Chief Academic and Accountability Officer where he led the school improvement process. Under his leadership, the system decreased the number of “F” rated schools from 22 to 5 and increased the number of schools rated “C” or above from 6 to 12, a 100% increase. On April 11, 2019, the Mississippi State Board of Education appointed Dr. Wright as the Founding Superintendent of the Achievement School District.

In addition to his work as an accomplished school and central level educational leader, Dr. Wright is also an experienced college/university instructor, having served in teacher preparation programs at Florida State College at Jacksonville (FL), Trinity University (Washington, D.C.), as an affiliate faculty of special education and educational leadership at Regis University (Denver, CO). Currently, Dr. Wright serves as a contributing faculty in Walden University’s Ed.D./Ph.D. program in early childhood. Jermall earned a Bachelor of Arts in Social Science Secondary Education and a Master of Education degree in Educational Leadership from the University of North Florida; a Specialist degree in Special Education from the University of Florida; and a Doctor of Education degree in Leadership for Educational Equity with a specialization in Early Childhood Special Education Policy from the University of Colorado Denver. His research interests centers on systems transformation, issues of equity and leadership in high performing/high poverty schools, over-representation, and early intervention for young students of color with or at-risk for behavioral related disabilities. Most importantly, Jermall is the proud father of Jaydon Jermall (17), Trinity Jael (15), and Joshuwa Jermall (13).
Since building makeshift blackboards and teaching neighborhood children in the backyard of his childhood home, Jermall Wright knew from an early age that teaching and education was his passion and calling. From 1997 to 2001, Dr. Wright started his career as a 5th grade and middle school social studies teacher in Jacksonville, FL. He then served as an assistant principal with Alachua County Public Schools (Gainesville, FL), and as an elementary and secondary school principal for ten years with The Potter’s House Christian Academy (Jacksonville, FL), Duval County Public Schools (Jacksonville, FL), and with the District of Columbia Public Schools (Washington, D.C.). 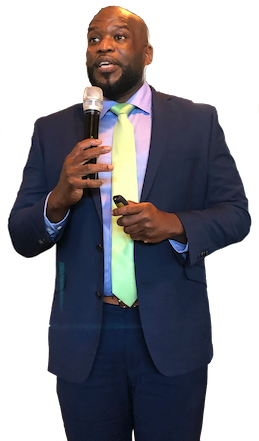